There are once-in-a-generation players that sweep a sports fandom off its feet and change the way the game is played forever. The long and storied history of baseball has many players like this: Ty Cobb, Babe Ruth, and Willie Mays are just a few names of men that have shaped the way baseball is played. Prince Fielder is NOT one of these men.

Prince Fielder was an average (at best) first baseman, and, while he was known for his hitting, ended his career with a mediocre .283 batting average, 1645 hits, 1028 RBIs, and 319 home runs (which, coincidentally, is the exact same amount of home runs Prince’s father, Cecil Fielder, hit during his time in the majors). Not bad for an 11 year career, but Prince won’t make it onto the Mount Rushmore of baseball players. Prince Fielder is to baseball what Fruits Basket is to anime: he’s not one of the greatest, but you have a soft spot in your heart for him. However, I will always be left wondering what his stats would have been had he not been forced to retire at the age of 32.

On the left, Cecil Fielder. On the right, Prince Fielder.

But these are not the reasons why he stole my heart, along with the hearts of millions of others. Even before he came to Texas, when he played for the Detroit Tigers (who I LOATHE), I was a fan of Prince Fielder. Prince is about as average-looking as they come. He was a power hitter, and you can see where the power comes from (hint: he weighs 275 pounds). And while some see his large and powerful gut as a hindrance, he ran the bases with conviction and determination (while lacking anything that could be labeled as “grace”). Prince was also a big fan of his teammates and would be the first to congratulate another player on a home run or athletic play. When he was not on the field, he earned the love of baseball fans all over the continent due to his magnetic smile and happy-go-lucky attitude towards everything.

Prince Fielder stole our hearts much like he stole that man’s nachos.

Prince was just a genuine GOOD GUY. He wasn’t an intimidating athletic freak that no one could relate to. He’s your brother, your uncle, your cousin, your best friend. He had a gift and never once took it for granted. He cared for his friends. He became a pillar of whatever community he was a part of, bringing his Uncork for a Cause charity with him from Detroit to Dallas. He respected the game.

Which makes the ending to his story all the more tragic: after his second neck surgery in three years, doctors told Prince he could never play again because the risk to his neck was too great. In a tear-filled interview with his two young sons by his side, Prince told the world he could no longer play the game he loved, the game he had been a part of since he was a little boy. If you haven’t seen that interview yet, I recommend keeping a box of tissues nearby when you do. And if that doesn’t make you break down, listen to teammates Adrian Beltre, Mitch Moreland, Ian Desmond, Elvis Andrus, and Carlos Beltran talk about Prince’s premature retirement and how much he meant to them as a teammate. 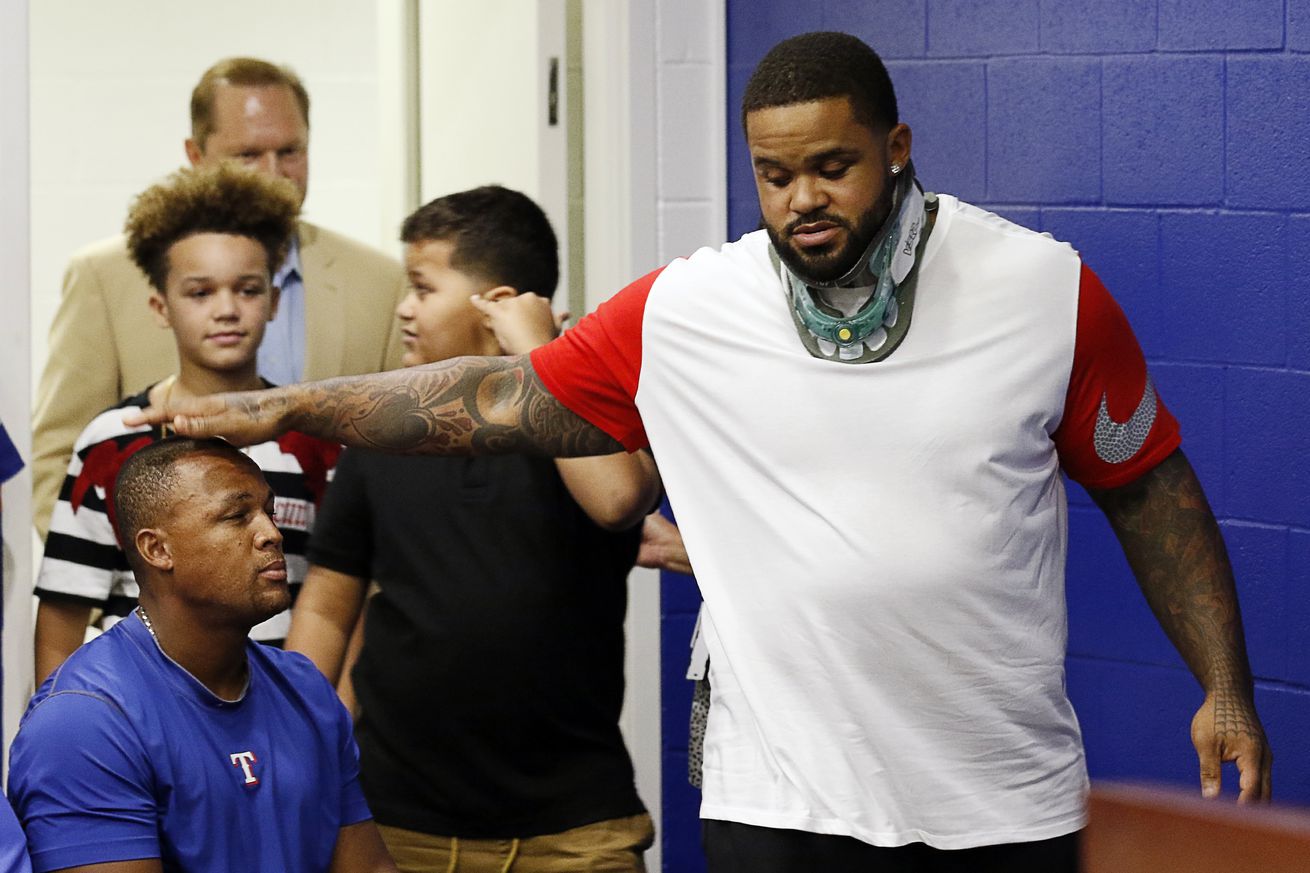 While walking into the press conference where he announced his retirement, Prince Fielder touches Adrian Beltre’s head one last time. Adrian Beltre is notorious for hating having his head touched, so for him to allow Prince to do so is a testament to how much his teammates like him.

Life’s not fair if guys like Prince Fielder can’t play the game anymore. Desire, determination, and passion should be enough. The American Dream is all about the rewards of hard work, of overcoming any limitations you may have, and of desire leading to greatness. If anyone deserves the American Dream, it’s this guy. But Prince Fielder proves to us that it’s not enough, and that’s too fucking brutal to dwell on. So, instead, here are some of my favorite Prince Fielder highlights to cheer you up.

Prince Fielder on the cover of ESPN’s annual “Body” issue.

For me, there’s no other player that was more fun to watch, easier to love, or more memorable. If you look at his average physique, his undeniable charm, and his clear passion for the game of baseball, maybe Prince Fielder is a once-in-a-generation player, in a different way than prolific hitters like Cobb (who ended his career with a batting average of .350) and Mays (who had 660 homes runs). Prince Fielder is not the kind of player who shows you everything you’re not, he shows you everything you could be. You know, if you had the talent and drive and stuff.