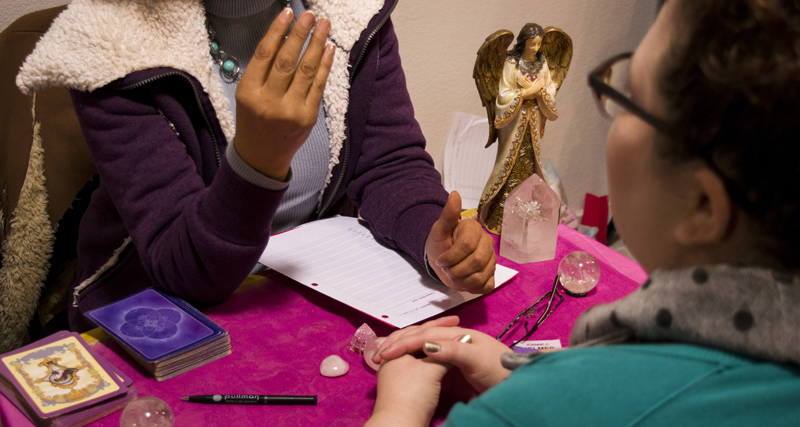 A Trip to the Dallas Psychic Fair

When POME announced they were doing a theme week on ghosts, to say I was excited would be putting it lightly. I wouldn’t call myself a skeptic, as there’s a lot in the universe that I don’t understand and to think that I have it all figured out would be mighty pretentious of me. I definitely lean more towards being a Scully than a Mulder. However, there’s a part of me that definitely WANTS to believe, especially in ghosts. I’ve always been fascinated with the concept of ghosts, not so much because I want to believe in an afterlife but because I always thought ghost stories were cool and someday (fingers crossed), I’d like to be in one. This theme week gave me the perfect opportunity to attend something I’ve been wanting to for a long time: the Dallas Psychic Fair.

The Dallas Psychic Fair is a monthly held fair at the Valley View Center in Dallas. It’s in that weird part of Dallas that’s sort of rundown but trying to build itself back up thanks to the recent construction on 635. Parts of it are old, parts of it are new, and no one knows exactly what its identity is supposed to be. It’s the perfect place for a monthly gathering of psychics, vendors, and those who want to believe. The Dallas Psychic Fair claims to be the largest and oldest of its kind in Dallas. It’s been held since 1979 and is currently being run by Cheryl Andrea, a clairvoyant and holistic practitioner.

Before going to the fair, I signed up online in order to secure a discounted entry fee (the fee is normally $7, but I got it for $5) as well as to make an appointment with a psychic. Already I was running into a roadblock because there were so many to choose from. There were about 20 readers to choose from and they all had different kinds of psychic readings to offer: palm readings, numerology, tarot cards, animal communication, and handwriting analysis, just to name a few. It was incredibly overwhelming, but since I was going to write for the Ghost Week theme for POME, I decided to go with a medium since that sounded like my best bet for talking to someone about ghosts. I settled on Mavi Helmer, a clairvoyant and medium who offers past life, spirit, and angel readings. I signed up for the 12:00 – 12:15 slot and paid my $20.

I took Nick along with me to take pictures of the event. He would definitely be categorized as a skeptic so it was nice of him to give up a couple of hours of his Sunday for me. We arrived just in time for my noon meeting with Mavi. As I walked in, I was a bit overwhelmed by the set up. The sides were lined with small tables where the psychics sat. In the middle, there were several vendors and massage therapists. In the back was a table set up for those who wanted to make an appointment with a psychic. The kind volunteers at the front desk where I checked in pointed me in the direction of Mavi. As I approached, she smiled widely. She wore a cute purple parka that matched her kind disposition. I told her that I was there to write about ghosts and spirits and wanted her insight. Mavi was kind enough to tell me her story.

“It started when I was three years old,” she began. She told me that she experienced feelings that were not her own. At first it scared her, but her Catholic faith along with her training helped her hone her gift. I asked her if the spirits scared her anymore. She smiled and said, “No.”

My questions about the afterlife took up most of the time, but Mavi was kind enough to do a short reading for me. I asked her about my dreams, specifically a recurring nightmare I have about my mother. My mom died when I was 14, but I have dreams that she didn’t die but left my father, brothers, and me for another family. Mavi listened to my story and told me that my dreams were my mother’s way of telling me that I’m clinging too firmly to the past. She also told me I had “the gift” which, to be honest, excited me very much.

After my meeting with Mavi, I was stopped by another reader who asked to look at my tattoos. After showing her my arm, the reader asked if I knew what my “number” was. I told her no, and she responded, “Something told me to stop you and ask you.” I was intrigued and told her I would make an appointment to have a reading with her. I asked her name.

After making my appointment with the front desk and paying $20, I sat down with Toni at her table. She had a kind face that was quick to smile. What struck me the most were her earrings: colorful with large numbers dangling from their base. They were perfect for a numerologist: a practitioner of numerology who believes in the divine, mystical relationship between a number and one or more coinciding events. Numerology works in the same way as the zodiac and horoscopes in that your life number can dictate your life path and can hint at things about your personality.

Toni asked me my birth date and calculated my numbers (for the curious, my life number is 9). The first thing she said was, “You should be a teacher.” Not that I am a teacher, but that I should be one. That brought a large smile to my face. My father has been telling me since high school that I should be a teacher and during this period of unemployment, I’ve given the idea some serious thought. Toni went on to tell me that I am a very creative person who has had a rough childhood and it has stunted my growth. She told me that I need to embrace who I am and stop being so hard on myself. (To be fair, I think that’s something everyone needs to hear.)

Toni also did Nick’s numerology and my mother’s. It was nice of her to do so, and I did find it insightful. She also said that she interprets dreams. I told her about the recurring nightmare that I told Mavi. Toni said that my dreams were my mother telling me to stop holding onto my anger at her death. She, like Mavi, told me that I have “the gift.” It’s still as exciting to hear the second time as the first.

After my meeting with Toni, Nick and I decided to walk around the vendors and have a look at what they were selling as well as ask the vendors their thoughts about ghosts. The first vendor I stopped by was KKG Creations owned by Gwen Albee. She was a warm-looking woman who had a sweet but sad smile. I stopped there because I was so taken by her gorgeous jewelry. I browsed a bit before I could work up the nerve to ask her about ghosts. Asking a medium is one thing, it’s pretty much guaranteed they believe in the paranormal. Asking someone other than a medium, on the other hand, can open you up to ridicule (which is something I try to avoid).

After working up the courage and explaining my article, I asked Ms. Albee her thoughts about ghosts. She told me she believed in them 100%. “My grandfather was with me from when I was 5 until I was 57.” She said that, at first, everyone in her family could see her grandfather. It was so shocking that at first her family thought the ghost was actually an intruder. But they quickly accepted him as a specter, and he was a part of Gwen’s life until she was 57. When I asked her why he left, she told me that someone else needed him. She had tears in her eyes.

The last vendor I spoke to was a lovely couple that ran the shop Free Sophia. When I asked about ghosts, the husband immediately pointed to his wife. She spoke about some creepy instances that happened in her home while she was pregnant. She seemed shook up just reliving the experience. She told me that she would hear noises and see shadows that shouldn’t have been there. After a couple of experiences like that, she told me that she would no longer stay in that house alone.

I left the Dallas Psychic Fair the same way I came in, not completely a skeptic and not completely a believer. However, I did gain some insight on the services that mediums offer. I believe there are a lot of things that we innately know about ourselves, our future, and our relationships but things such as ego and anger (you could say, all the things that haunt us) get in the way of that. Mediums help us brush all that stuff away and see ourselves for who we really are. I’m still intrigued by the whole concept and am already committed to going to the next fair. I even have some friends who wish to join and perhaps gain their own insight.

I’ll leave you with this: The psychics I met are kind people who genuinely want to help. Whether you believe their gifts to be paranormal or not, they are certainly gifted in reading people and telling them what they need to hear.